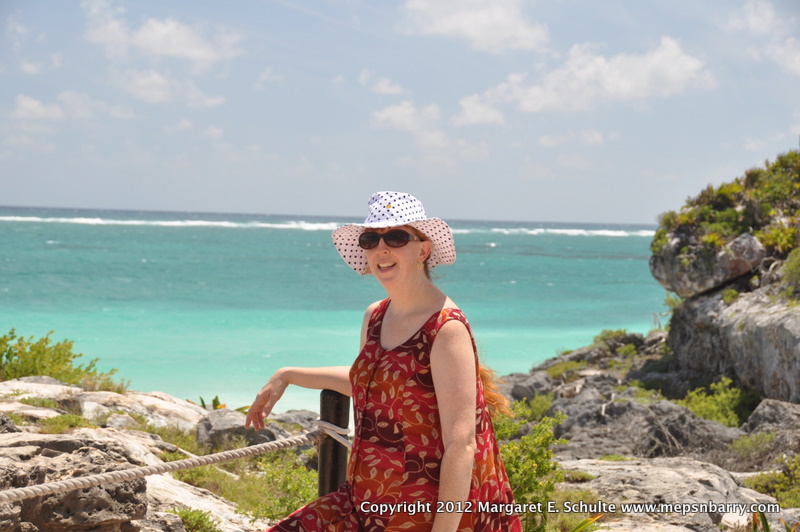 On mepsnbarry.com, I have published a gallery of the best photos from my recent trip to the Yucutan Peninsula to see the Mayan ruins. I hope you enjoy the beautiful Caribbean sunshine and mysterious ruins in the jungle.

All photos are copyrighted, but feel free to send me an email if you’d like to reuse one.

On the side of the road, up ahead, I saw a small sign on the ground that said, “Elotes.” I was wracking my brain, trying to remember what that word meant, when I noticed what was above it.

A black-and-white road sign with a symbol on it, looking like a snake that ate two donuts. Tope!

“WATCH OUT!” I cried in alarm, from the passenger seat. My driver and companion, Philip, slammed on the brakes and eased the tiny rental car (he called it “the pregnant rollerskate”) slowly over the nearly-invisible, transmission-eating bump.

“Whew. Thanks,” he said, as he shifted back up to speed.

The sudden stop was re-enacted over and over during our recent trip to see the Mayan ruins of Mexico. “Topes,” or speed bumps, are a fascinating part of the Mexican driving experience. Completely disruptive to comfortable car travel, we found them all over the highways of Quintana Roo. According to expat writer Stan Gotlieb, Mexican slang for them is “policia durmiendo,” or sleeping policemen.

There’s no consistency to the character of the topes. Some are wide plateaus, some are rounded bumps, some are big pieces of rope that jar your teeth. The signage, too, is inconsistent. Some are marked 300 meters in advance. Some are painted yellow. Some are not marked at all, just waiting for you to fly over at full speed and land in the arms of the local mechanic. We saw almost no stoplights in Mexico, but hundreds of topes.

Clever entrepreneurs use their village topes to offer fruits, vegetables, and baked goods to the drivers who are forced to nearly stop to make it safely over the deadly bumps. Some have even erected permanent shops and stands next to the topes, including one where we bought a pineapple. Is it possible that the shopkeepers erect the bumps, or at least lobby for them, as a way to get business?

After we’d made it over the “Elotes” speed bump and into the village, I asked Philip to make a u-turn. He cruised back and parked in front of the bump. I had finally remembered what “elotes” meant: Corn.

The young woman at the stand took my money and pulled two ears of corn out of a large pot, steaming over a wood fire. She squeezed lime juice over each ear, then spread it with a thin layer of mayonnaise. This was followed by chili powder and fresh-grated hard cheese, and delivered with a handful of napkins. Many years ago, I had read about this way to serve corn in a Molly Katzen cookbook, but I never thought I’d get to try the real thing, on the Tulum-Coba road.

As she quietly prepared the corn, I found myself wondering if she and her family had erected the speed bump, and what she thought about working every day, selling corn and vegetables next to a speed bump. I wished my Spanish was good enough to have a conversation with her.

The corn was delicious, and I used my clumsy Spanish to thank the young woman. “Gracias,” I said. To which she replied, in completely unaccented English, “You’re very welcome.” I was too surprised to reply.

Up ahead in the road, what is that?
And we swerve so it won’t go “kersplat.”
Then we stop. I run back,
Find it’s just what I lack,
It’s a perfect-fit Panama hat!

On my recent trip to Quintana Roo, Mexico, I didn’t buy myself a single souvenir. I did, however, bring back the cutest Panama hat you ever did see! With the help of my friend and driver, Philip, I rescued it from the middle of the freeway and have been wearing it ever since.