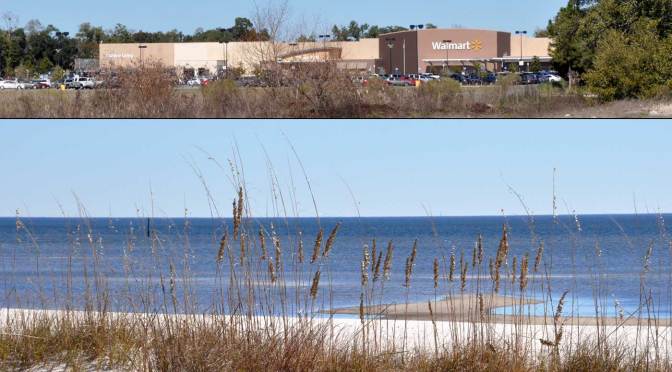 On January 27, I was driving from Dallas, Texas to St. Marys, Georgia on backroads. I collected all the funny bits for my sister, as a belated birthday present.

The Gulf coast visitor’s center had a display of sequined Mardi Gras finery. My favorite was the one featuring hot dogs, hamburgers, and popcorn containers.

In one small town: “Not Your Mother’s Tavern”
In another: “Mom’s Bar”
In a third: “Mother Clucker’s.”

I usually get a kick out of church signs. When I did a Google search, I realized many of them are not original. The fact that they come from sayingsforchurchsigns.com, rather than from God himself, takes the fun out of it.

Donuts. Did you know the US has a Do-Nut Belt? Shipley’s Do-Nuts says it’s Texas, Louisiana, Mississippi, Alabama, Arkansas and Tennessee. As I drove, I noted dozens of hole-in-the-wall places with no pretentious hyphen in “donut”: Dee Dee Donuts, the Donut Palace, Donut King, and my personal favorite, the Texas Donut Ranch.

I didn’t succumb to either donuts or Do-Nuts.

But it was touch-and-go when I saw a roadside sign saying “Original Homemade Sausage Jalapeño Cheese Bread, one mile,” with an arrow pointing left. I will always regret not stopping.

I will never regret stopping at Ozzy’s. I got love in a takeout container.

Dick took my picture at the Russell Stover Factory. I know you’ll roll your eyes at this. That’s why I didn’t buy you any.

Next Left: Dead Man Road. Followed by a smaller sign saying “Cemetery.” Dunno who else would want to live there.

On any given day, along Interstate 10, thousands of people see the memorials to Buddy, Amanda, Ben, Brian, Wesley, and the Dobbins family. Their descansoes, or roadside memorials, feature lettering large enough to read at 75 mph.

At a slightly slower speed, I drove for five minutes past acres and acres of stored FEMA trailers. In the past decade, they have been replaced by manufactured homes, and there are many businesses that thrive on such things: “House Moving, Lifting, and Leveling.” Fueled by donuts, no doubt.

Speaking of housing, did you know you can buy a whole acre of residential beachfront property in Pascagoula for only $159,000?

Just down the road is the most incredible view I’ve ever seen from a Wal-Mart.

Another pretentious sign: “Mississippi Gulf Coast: A Certified Retirement Community.” Certified by whom? Evidently, I’m not the only one to ask that question. Even the Wall Street Journal has a sense of humor about such things as ticks, chiggers and snakes.

One last comment: Even if Cretin Homes is named after the company’s owner, I’d change it.