All the beautiful flutterbies take
Margaret’s breath away, crossing her wake!
In Sapelo Sound,
Dozens fly all around,
Do they know they’re our sailboat’s namesake?
~~~

When I woke up, the boat was pitch-black,
And I thought we were under attack,
You have gotten my goose!
Now I’m calling a truce…
Go away and be quiet, Aflac.

Marine Propulsion, the boatyard where we are moored near Charleston, South Carolina, is home to a personable but extremely loud grey goose named Aflac. He came by to wake us up at first light yesterday morning. First, he floated next to the boat and kind of chuckled. When that didn’t get attention, he pulled out the big guns. My goodness, that bird is LOUD!
===

The Flutterby yes it will splash
After a copious infusion of cash
The Meps and the Barry
Will sail her (hail Mary!)
As she takes on a seaworthy dash.

This one is a guest limerick from Blender Boy Nick. As a fellow sailor, he knows just what it takes to get a boat off jackstands and into the water! Thanks, Nick, for your understanding of the situation.
===

I know that it’s still only May,
But a tropical storm’s on her way.
For the engine to fail
On the eve of a gale
Would indicate, this ain’t my day.

He was late getting back to the boat,
With the clothing he needed to tote,
And a smile on his face,
For he’d found, in that place,
That it’s great fun to feed a small goat.

Here’s a picture of Barry feeding 4-day old Lucky, the tiny goat who was living in the laundry room at Osprey Marina: 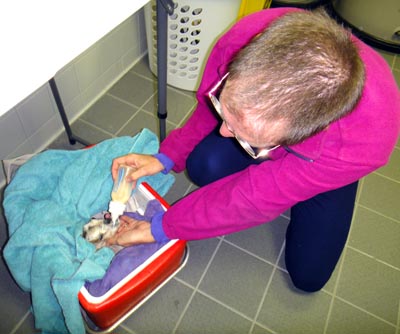 This word once described her: Poquito.
But this bug, with her massive libido,
Must have slept with a cow,
For her offspring are now
Too huge to be called mere “mosquito.”

There once was a man with a frown,
And he glared at our boat, bearing down,
We escaped in disgrace,
From that look on his face,
But our new spot’s the best one in town.

In Wrightsville Beach, for the first time, we dragged anchor amongst other boats. Most of our neighbors were kind, except for one who sat on his deck and stared. We had a lovely night by ourselves in another basin, free from fetch and wakes, with an excellent internet connection.

My thesaurus tells me that a synonym for “disgrace” is “dragged through the mud.”

The tourists in Southport today,
Signed up for a tour of the bay,
The first stop on their trip,
Was this Flutterby ship,
Which they circled, then puttered away.

Anchoring in the middle of Southport’s boat basin, home to fishing and charter boats, has made us a temporary tourist attraction. The skipper of the sunset cruise boat circled us, asking us questions and then explaining our answers to his landlubber tourists. Barry and I cracked up this morning, when one of the little charter boats slipped his lines and the voice of woman rang across the water, saying, “I hope this is not going to be like Gilligan’s…”
–

Eighteen days so far, but it seems a lot longer. Traveling at the speed of snails, we try to make about 50 miles each day along the well-marked, well-traveled Intracoastal Waterway. Some of the route we’ve traveled twice, some three, and some four times. “I remember those houses with the little structures on top,” Barry said, in Myrtle Beach. “We anchored near that sunken boat in 2004,” I said, in the Waccamaw River.

It gets a little boring. But unlike the snowbirds driving up and down I-95, we have the wildlife to distract us.

“Look, dolphins!” we’ll say to each other, pointing. Of course, if you look directly at the place where they were just seen, you’ll miss them when they come up the next time. Because they always come up someplace else. You have to sort of unfocus your eyes and let your gaze rest somewhere near where they were. Then you can quickly refocus when they appear next, someplace else.

But one day, in Georgia, I came up from the head, and Barry said, “We have a companion.” As if on cue, a dolphin surfaced about five feet from the cockpit. “Wow!” I said, running over to see where it would come up next. To my surprise, in about a minute, it came up again, in exactly the same place. And a minute later, again.

Our marine mammal friend was so dependable, I began to talk to it. For no real reason, I decided it was a she-dolphin, and I called her “Flipper.” I’d wait for her to come up, anxiously calling “Here, Flippy, Flippy, Flippy!” She probably wondered what the stream of strange and excited noises were, each time she came to the surface.

At one point, I saw a commotion in the water a few hundred yards away. It was a group of dolphins, fishing. They were swimming and thrashing in circles, making turbulence to confuse their prey. We call it “bubble-fishing,” or “bubble-chasing.”

At a bend in the river, I was so distracted by our companion that I nearly ran Flutterby aground. “Yikes! The depth is really dropping off here!” I said to Barry, concerned. “Well, aren’t you supposed to keep the green markers on your starboard side?” he replied. It was a very silly mistake, given that we had kept hundreds of green markers to starboard for days, and would continue to do so for the entire trip. For landlubbers, it’s like forgetting that you are supposed to drive on the right side of the road and wondering why the cars are suddenly coming at you.

Flipper stayed with us for almost an hour, about five miles. Finally, as we were approaching an opening bridge, Barry looked back and saw a fin, about a boatlength behind us, going away. “That looks familiar…isn’t that her?” he said. “Bye, Flipper!” I called. “Thanks for traveling with us!”

We were still marveling at our amazing dolphin experience when we saw something strange, about a boatlength away. “What kind of fish is that?” I asked. It was a very small fin, too small for a dolphin. Then there was a splash, and a larger fin appeared right beside it. “Oooooh! It’s a baby!” Just at the surface of the water, we could see two shadowy shapes — a mother dolphin and her baby. She was pushing him gently with her snout to the surface of the water, like a tugboat shepherding precious cargo.

In addition to the dolphins, we saw a sea turtle, his back covered in barnacles, swimming off the beach at Harbor Island. We’ve seen enormous rays, sometimes just at the surface of the water, and several times we saw them jump clear out of the water. We stopped the boat in Winyah Bay, outside Georgetown, to watch 3- and 4-foot tarpon leaping out of the water, too, straight up. The splashes were bigger than pelicans, which have been known to wake me up when they dive near to the boat. A local fellow explained that tarpon don’t eat when they are jumping, so it’s no good fishing for them. That explains why we had the tarpon show all to ourselves.

The past day or so, in South Carolina, have been “osprey alley.” Along the Waccamaw River, every navigational piling has an osprey nest on it, with a momma and her babies. At a thickly forested anchorage, Barry was puzzled, because one of the nests seemed to have a momma and babies, and two other osprey bringing fish to it. The little ones hollered for food all day long.

There’s a whole class of people out here who seem unaware of the wildlife. They zoom by on noisy, go-fast speedboats, cheerfully waving their beers at us. Some pass by over and over, their hateful wakes rolling and bouncing us as they tow children or waterskiiers. Without looking behind them, they don’t know the turbulence they create, and they are completely unaware of the course changes we make when they stop suddenly to pluck a crying child out of the water. At least the jetskis rarely leave a wake. But they, too, are unaware, not noticing that their spray is falling on me and my poor camera.

I call them the wild life. I have to work to remember that they are people, too, not just the obnoxious machines they drive. They are not tormenting me on purpose, they are just unaware.

Just as they are unaware of the dolphins, the osprey, the sea turtles, the dragonflies, the butterflies, the rays, the red-winged blackbirds. My wildlife. I’d share it with the wild life, if they’d just slow down.

Though we stayed from December til May,
It was time to get back under way,
We had put our hook down,
In a posh Florida town,
And they just kicked us out yesterday.

Just kidding! The truth is complex —
No one in this fine town objects,
To our presence, in fact,
They speak to us with tact,
For my Dad’s the Crown Prince: “Vero Rex.”