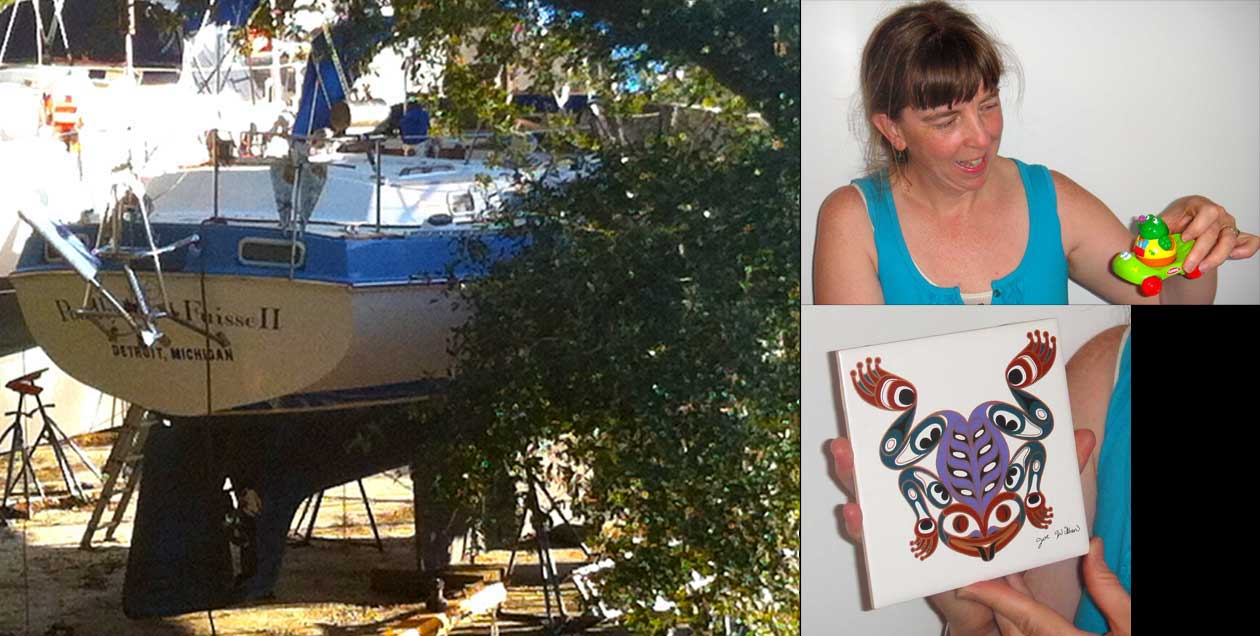 Last month, I tried to donate a bag of stuff to the Salvation Army. When I pulled into the parking lot, one Monday morning, I found the office staff filling a dumpster. Over the weekend, someone had left an entire household’s worth of stuff on their doorstep. Rather than sort it, they just threw it all away. They looked at my tiny bag and said, “Sorry, we’d just put that in the dumpster, too.”

I took it back to the boat, which is full of overflowing piles on the settee, pilot berth, centerboard trunk, and chart table. I’m not sure where it is now, maybe on the dinette table, which is buried under a pile of pure, unorganized crap that threatens to fossilize.

It’s not my fault that I have all this stuff. When we bought Flutterby, in 2006, she was completely empty. There wasn’t a single dish, piece of silverware, or tool on board; we carefully selected the trivets and toys and t-shirts and canvas bags and navigation tools we wanted and brought them to the boat.

Over the next seven years, something unexpected happened in our lives. People we knew and loved died.

Our older friends nod their heads knowingly and say, “Get used to it.” But I stomp my foot and say, “No! We are too young for this!”

The problem is, every person who was close to us leaves behind items we love and have to find room for. Flutterby now has a Froggie trivet and a lot of Froggie toys — those were Stevie’s. Bill Brown left behind canvas bags from the Seattle Women’s Sailing Association that bring back happy memories. My clothing locker is overflowing with giant tie-dyed shirts from Philip’s collection. The chart table has navigation tools from Barry’s uncle Roger.

Don’t even ask about the ashes. They take up room, too.

Yesterday, I said to Barry, “This boat is full of ghosts.” He shook his head, saying, “No. Just memories.” That same day, I found out it could be worse.

Lance, who has been working on a very large Gulfstar sailboat, was gone from the yard when we returned from our Christmas trip. We heard that he’d gone north to attend a friend’s funeral.

Yesterday, Lance stopped by to talk to me and Barry. He’s a fairly quiet, thoughtful man, not someone who talks a lot.

“See that boat, there?” he pointed to a modest-sized sailboat across from his own. “I just inherited it,” he said, with a sigh.

Lance has owned a lot of boats in his life — this one is his 17th. She’s half the size and complexity of his own boat, and she’s practically ready to go. We talked about how easy it would be to finish a couple of projects, jump on board, and go cruising.

But Lance isn’t ready to give up his boat for his friend’s. That brings me back to my original dilemma. I’m not ready to give up my clothes for Philip’s, or my canvas bags for Bill’s, or my toys for Stevie’s. I just keep cramming more and more stuff into the lockers.

Lance did give me a great idea for storing the ashes, though. He was checking out a boat for sale once, and he noticed that it had a false bulkhead. Lance started poking at it, trying to figure out what was behind it, when the woman who owned it stopped him. “Don’t mess with that! That’s Harry!”

It turned out that her deceased husband came with the boat.