It started with a deck leak where the bolts hold the bow pulpit onto the boat.  Then we removed the bow cleats and two big bolts holding on the anchoring platform. Then the grinding began, wearing full protective gear. 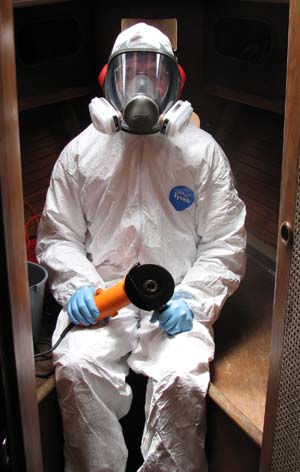 I’ve had much better times in a different bunny suit…and Meps had a great time with just the head a while back. But this is a different time, and it calls for another kind of bunny suit.  I actually like it, especially the riot police style facemask which lets me both see and breath at the same time. And while this stuff isn’t fun, it really improves my life/health while I’m grinding fiberglass and doing fiberglass and epoxy repairs, which has been job #1 lately.

Actually, the balsa core wasn’t damaged far from the bolts, but it was kinda rotten for an inch or so around the bolts.  I have to call that “good news” since it means that the water and rot didn’t migrate very far.  Unfortunately, it was still a pretty big grinding job because where some of the bolts go through, the core was angled at 45 degrees, which made for a very poor place to bolt something on.  So I had to grind it out in a much larger area to make a flat-ish area under the bolts, then bevel the area around that.  Up in the forepeak, this is even more grinding, because there are two layers of balsa core (about two inches think) for extra strength where it holds the main mast up, so the bevel just goes on and on and on.

This makes it sound like a simple job, probably done quickly.  But of course, it wasn’t–first, the grinding happened in three or four strages as I figured out how big my problem was and how much bevel I needed, and that coarse sanding disks on my grinder work better than the abrasive disks for this job….with about four trips to the hardware stores trying to figure out exactly which attachments I needed for the grinder. (Thanks again for the grinder, Tom!)  Then there is the fiberglass and epoxy layup.

Since I had put on the full suit of gear and started grinding away in temperatures too hot for the job, Meps took the uncomfortable job of climbing into the forepeak laying on her back and fiberglassing over her head while I mixed epoxy and saturated cloth on deck and passed it down.  The first time it seemed easy, but that was before I took a careful look and then ground out quite a few voids.  The net result was that the first layup didn’t actually leave much on the boat, but we learned a lot:  1. Don’t lay up fiberglass at dusk, when you can’t see it.  2. If you are doing it overhead, use plenty of resin so it saturates well.  3. Grind those holes smoother so it won’t make voids at the transition points.  4. Start with thickened epoxy in the corners like a fillet to help with those voids too.

So I went back to grinding, then Meps went back to glassing.  Ultimately, if I remember correctly, there were three more gooey upside-down layups with glass cloth and epoxy.  Then I realized that the new backing plates wouldn’t sit flat.  Oops, I neglected to mention that in addition to the angle under some bolts, there were only fender washers underneath, and we didn’t think that was up to the job….so we made backing plates from 3/16″ aluminum plate…I know 3/16 is overkill, but that was the size of the scrap available in the boatyard. So back to putting the backing plates on–the flat area that was supposed to be above them was smaller than they were, so first we tried putting on some layers of chopped strand mat with epoxy to build up a flat area, but that didn’t do enough.  So after letting it cure and grinding it for the next coat to stick, we added a layer of thickened epoxy. Still the backing plates didn’t quite fit flush.  Grind it again so it had a little more tooth, and move on.

Then came the next step–fitting the bow pulpit back on.  It got bent a little in its history somehow, and that is probably why it wants to spring its feet apart–when you attach one foot, the other three don’t want to go where they belong any more.  So with a bit of wrestling, I got some holes drilled that were almost aligned–I could get all 12 bolts through, and they didn’t ALL bind up at once, at least after I had re-drilled three or four holes to enlarge them.  Then we tried to fit the backing plates onto the bottom….I mostly ground those holes larger with the Dremel instead of re-drilling them.  Finally we cleaned everything up, waxed the bolts and nuts, and added a last layer of thickened epoxy to both fill the space and glue the backing plates to the underside of the deck.

When that was done, we removed the bolts and drilled the holes out again (the epoxy had formed threads on the bottom, and I wanted open holes to put nuts and washers on the bottom). Then one last grinding job — removing the frozen epoxy “goobers” — and a very careful final cleanup.

The bow pulpit is now installed, mounted with expensive marine caulk and 12 brand-new 316 stainless steel bolts, nuts, and washers. Finally one thing is ready to go back to sea–way too much of the work so far has been in the direction of taking things apart instead of putting them back together.