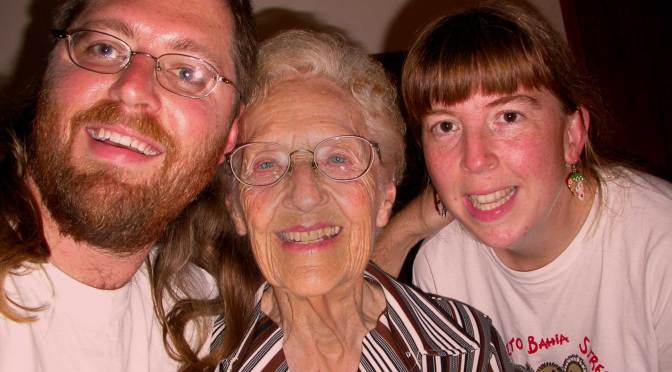 Barry’s grandmother, Loraine Gaspeny, passed away this week in Saginaw, Michigan. She has been a huge influence in our lives, and she was well-known to our friends, readers, and Margaret’s family. We’ve written a joint blog post to share a few memories and stories.
~
Barry: My grandmother, Loraine, lived 101 years on this planet. With so much life, I don’t know where to start remembering her. She lived over half her life before I was even born.

She lived independently, all the way through her last day in her apartment. If you asked me how I would want to spend my last day, doing my laundry would not be the first thing out of my mouth. I doubt she would have said so either. That she did her own laundry speaks of her strength and independence. I can only hope to have as much.

My sister and I called our grandfather by an interesting merger of Italian and American titles that he chose for us, “Grandnono.” But I always called my grandmother “Grandma.”

Meps: When I met Barry, 26 years ago, I didn’t have grandparents. Three had died before I could remember them, and one lived just long enough to give me an impression of grumpiness. Barry’s grandparents were more fun and spontaneous than any I’d ever known. I first met them when they drove all the way from Florida to Ohio to surprise Barry’s Mom on her 50th birthday.

Barry: I remember their beach house in Au Gres, Michigan, on Lake Huron. I just thought of it as my grandparent’s house at the time. I didn’t think of it as their retirement dream home. The whole family went fishing in their boat, and we’d all catch lake perch. At the end of the day, Grandma fried a huge mess of it for dinner. I didn’t have to clean the fish; I just caught the fish and ate the fish.

I rode on their snowmobile, but not in the snow. Mostly on the sand in the summer, loving the excitement of going fast on a noisy machine, complete with the smell of two-cycle exhaust.

Meps: When I met her as an adult, Grandma told me and Barry stories about the snowmobile club, how they would ride from party to party on the frozen lake, drinking and having a great time. After Christmas, they would put their trees on the frozen surface of the lake as navigational markers. She loved to reminisce about the good times with family and friends.

Barry: I didn’t understand at the time, but the beach house became too much work as they aged. So they sold it, got an apartment, and started spending winters in Florida. My first Christmas with a swimming pool was with them. One time, my sister and I got our faces painted at an amusement park, and came back to surprise my grandparents looking like clowns.

The six of us spent many evenings around their kitchen table, playing Uno or rummy. Some of those times, there were just four of us — my parents left to enjoy some much-treasured kid-free time. I appreciated playing with special toys they had, ones I didn’t have at home; eating treats that Grandma cooked; and generally being doted on.

Meps: Grandma showed her love with food, and I collected some of her recipes for The Foodie Gazette. Just last year, I asked for a Grasshopper Pie for my birthday. For Christmas this year, we’re going to have Loraine’s Dip and a Snowball.

When Barry and I first got together, I was amazed by the incredible boxes of cookies she mailed to his parents. When Barry and I received one at our first apartment, I was in cookie-heaven! Every single item — Cherry Bites, Icebox Cookies, Dream Bars, homemade fudge — was perfect, and individually wrapped in plastic wrap.

Barry: She never had a computer or used the internet. But Margaret has been writing about Grandma for almost as long as we’ve had a blog, so her memory will live on for a long time.

Meps: I’d never been doted on by a Grandma, so I celebrated her special place in my life. She took time to send a get-well card when she heard through the grapevine that I was sick, and she never missed a birthday or Christmas. I received three or four cards this year; I’m sure each one took much effort to write.

I know it was time for Grandma to go, but I’ll miss her terribly. One of the most interesting activities we shared in her later years (besides drinking champagne!) was reading tea leaves. I’ll be looking for messages of love from her in every cup.

This 2011 blog about Grandma really captures her spirit:
The Life of the Party
Here’s another gem, a limerick from her 100th birthday:
Vintage 1913: Here’s to Loraine! We are still toasting to her!
She can stop reading the obituaries now:
Obituary for Grandma