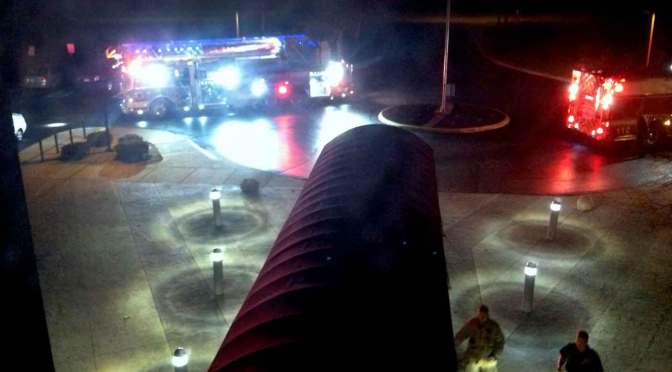 The night before I left my brother’s apartment in Columbus, I was packing my bags. “Are you going to carry those out to the car tonight?” Hank asked. I sat back on my heels and looked at the heap of stuff I’d dragged into his apartment during my nine-day visit.

It was dark and cold outside. “Nah, I think I’ll wait ’til morning,” I replied. “OK, can I turn this light out?” he asked me. He’s always turning out lights behind me; his vision is so poor that he’s content in the dark.

I went to bed early, to get a good night’s rest before driving to North Carolina.

“WHAT THE?!?!” I woke in the middle of the night to the loudest alarm I’d ever heard and a strobe light going off in the living room. A fire alarm! Was it real? I waited in hopes that it was a false alarm, but the hideous noise continued.

I got up, bouncing off the furniture by the pulsing light of the strobe.

I threw on a pair of jeans under my pajamas and a coat on the top and stuffed my feet into untied shoes. Hank didn’t show any signs of getting up for Armageddon, so I banged on his door.

While he put on his bathrobe, I grabbed my purse, my laptop, and two irreplaceable teddy bears. I threw a bulky blanket and two coats on top of my pile, then helped Hank with his slippers. I took one last deep breath and opened the door to the hallway.

It’s terrifying to have a fire in a big building and not know where it is. The hall was full of awful-smelling smoke, but there were no people. I dragged Hank towards the stairwell, hoping we were going away from the danger.

By the time we made it to the first floor, the only evidence of the fire was the alarm. Hank’s apartment was right near the source. I sighed, thinking of all my worldly possessions up there. I should have packed the car, then everything would be fine.

Fire trucks were just arriving. There were clusters of people in the lobby, some with walkers and wheelchairs, but nobody seemed freaked out. I sat on a sofa, embarrassed by my heap of coats and teddy bears.

The firemen charged through the front door, and then stopped. They didn’t know where to go. There was obviously an emergency — alarms were screaming, strobe lights were flashing — but the residents just stared at them without speaking. The firemen milled around, puzzled by the reception.

Most of the people who live in the building are completely deaf.

Finally, I stood up, teddy bears and all, and showed them the door to the stairs. “I think it’s on the third floor, down that wing,” I said, pointing. They pounded up the stairs in their boots, axes at the ready.

I sat back down to enjoy my late-night people-watching and wishing I could eavesdrop. Around me were small circles of people, talking excitedly in American Sign Language. ASL-speakers use much more than their hands. They use their whole bodies, like dancers, to convey complex meaning. I put my fingers in my ears to block the alarms, but the people around me were completely unfazed.

The fire was quickly out, and the firemen brought giant fans to blow out the smoke. They sounded like jet engines! Hank’s neighbors simply continued their silent conversations.

The whole catastrophe was over in about an hour, but I couldn’t sleep after that. I tossed and turned, my ears ringing. They would still be ringing the next day.