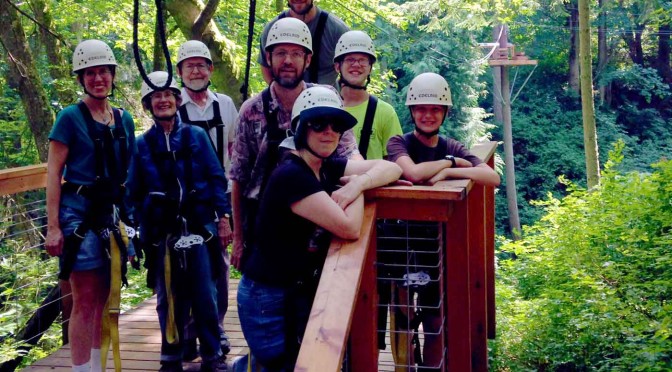 Please join Meps on Wednesday, July 16 at 7 pm for a scary (to her) presentation on “How to Talk to Strangers” at Ravenna Third Place Books in Seattle.

The young blonde girl ahead of me screamed in terror the whole way across. But when I stepped off the wooden platform yesterday, I wasn’t frightened at all. Ziplining is easy if you don’t have acrophobia, or fear of heights.

I was with Barry’s family on Camano Island for my first ziplining adventure. There were eight of us, all shapes and sizes, ranging from 11 to 73 years old.

The scariest part was just reading and signing two pages of liability release forms. Then we were outfitted with harnesses and helmets, and we climbed into an old Army truck to ride up the steep hill. Even though we were less than a mile from Barry’s parents’ Washington home, it felt like a rainforest tour I once took in Brazil.

For two hours, we rode six different ziplines that were up to 60 feet above the forest floor. When we reached the final platform, we were still about 40 feet up in a tree. One by one, we rappelled down to the ground, our descent controlled by two very capable guides.

I was quieter than usual, because I was enjoying the lush green beauty of the forest. Mistaking my reticence for fear, one of the guides patted me on the back and congratulated me on my courage. “This isn’t scary,” I told him, wryly. “I wish it was the scariest thing I’ll be doing this week.”

This Wednesday evening, July 16, I’ll be giving my first public book presentation at Ravenna Third Place Books, in Seattle. It’s completely open to anyone, it’s free, and I’ve promoted it widely, sending calendar listings and press releases all around Seattle.

I’m not afraid of spiders, snakes, or the dark. I’m a little nervous around alligators, but not much. Last week, I literally gate-crashed a large party, proving that I am not afraid of strangers. However, I suffer from glossophobia: Fear of public speaking.

Why, if it’s so frightening, do I want to do it?

I want to do it, because I believe in the power of my little orange book, Strangers Have the Best Candy. Over and over, people tell me they had a change of heart while reading it, that they go out and smile at strangers now, that they strike up conversations. This is not an entertaining little memoir. This is a book that advocates a new philosophy, a new way of interacting with other humans.

But like the screaming girl on the zipline, I have to remember that talking to strangers may be frightening to my audience. How better to understand their fear, than to suffer my own?

Having no innate fear of spiders, snakes, or strangers, there’s only one sure way. Glossophobia: Simply to be afraid of the power of my own voice.

At Amazon, some geek must say,
“We’ll publish her book on this day,”
But til then, I wait,
In a trembling state,
To unveil before first of May.

I was ready to publish Strangers Have the Best Candy this morning, so I hit the big, scary “APPROVE” button on CreateSpace. Much to my surprise, the book doesn’t get populated to Amazon’s servers immediately! Argh!

The waiting is agony, but it should only be a couple of days at most.