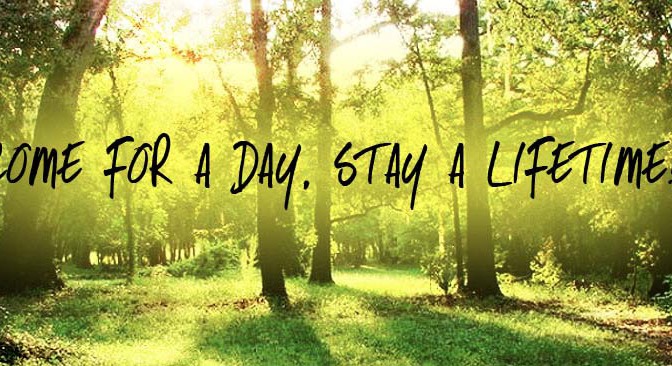 I hit the road yesterday from Vero Beach, Florida in Bon-Bon, my Toyota Matrix. I packed everything I’d need for the drive to Seattle via Las Vegas, including a folding bicycle, an inflatable kayak, clothes, art supplies, and two boxes of Strangers Have the Best Candy. I also brought lots of pillows, three teddy bears, a brand-new Therm-a-Rest pad, a couple of blankets, and a sleeping bag. I can make a cushy blanket fort in the back of the car and sleep anywhere.

In the late afternoon, I saw a sign for Withlacoochee River Park. It seemed like a nice county park, about 5 miles off the highway. I circled the camping area, which was mostly empty, then followed the sign to the office.

A young park ranger was outside the building as I got out of my car. He greeted me with a smile and asked how he could help me. “Is this where I pay for a campsite?” I asked. “Yes, it is,” he told me. “What kind of site do you need?”

I shrugged. “It doesn’t particularly matter.”

When I said no, his smile disappeared. “You have to have a tent.”

I continued smiling. “I can just pay the RV rate,” I said. He looked at my car and shook his head. I couldn’t figure out how they could have a rule against sleeping in the car, but I was determined to figure out a way around it.

What if I put my sleeping bag on the ground next to the car? Nope. What if I rigged a tarp as a tent? Nope. What if we called it a Toyota Matrix RV? Nope. At that point, he suggested that I wait for his supervisor.

While I waited, I thought about telling them my tent was six feet tall, pink, and went by the name of Harvey. Unfortunately, the supervisor who appeared was much more humorless, so I stayed quiet about having an invisible tent.

Condescendingly, he showed me the written rules, which said that I had to have a “commercially-made, flame-retardant tent.” When I told him my car was a very small RV, he rolled his eyes. “That? No way.”

I just waited. Finally, he said, “If you insist, I will call my supervisor, even though it is after hours on a Saturday evening, and I will have to call him at home.”

I nodded and said, “Would you, please?” He picked up the phone and called his supervisor. “I am so sorry to bother you at home, after hours, on a Saturday, but there’s this lady here who wants to camp…” His tone spoke volumes. “And she doesn’t have a tent, and she’s just driving a car.”

The man on the other end of the line said something. Then he said, “That’s what I told her, but she insisted that I call my supervisor, after hours, on a Saturday, at home.” He hung up with a smirk.

I put on my most gracious smile and said, “Thank you very much,” then I turned and went out to my teeny-tiny RV and drove back out to the road.

I pulled out my phone and ran a search for nearby campgrounds, and a listing popped up just a few miles up the river. When I clicked on the Sawmill Resort and Campground, the first thing I saw was the photo on the homepage. It featured three hot guys, two of them shirtless. This was not your every day campground. The list of amenities included a pool and several nightclubs. I read further, and found the statement “…the premier gay and lesbian community in the Southeast.”

I called to make sure they had a campsite for a person without a tent. No problem. I didn’t tell the woman I was straight.

In the camp store, the young woman took my credit card and gave me a wristband. “You do know this place is, um, alternative, right?” I just nodded.

When I asked where to set up camp, she wasn’t certain. “I’ve had this job for five days,” she told me, “and I actually haven’t been back there yet.” She was referring to the 120-acre community on the other side of the fence.

When I drove through the gate, I was unnerved to find that there were no other women “back there.” Just me and a few hundred guys of all ages, doing what everybody does on vacation: Relaxing. I stuck out like a sore thumb, but I felt completely safe.

More importantly, I felt completely welcome. As the FAQ said, in answer to the question, “Are Women allowed at Sawmill?” ”YES!  We are open to anyone who is open minded.”

It’s OK that I don’t have a tent. It’s OK that I’m not gay. Saturday’s curious turn of events reminded me that being surrounded by open-minded people is more important to me than anything else.