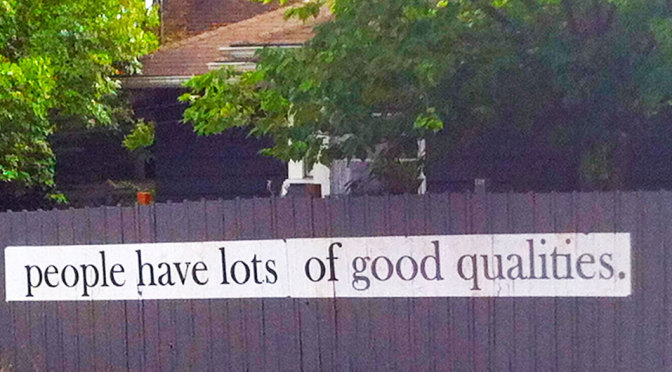 A number of years ago, my friend Jacqui gave me and Barry a couple of purple rubber bracelets she’d gotten at the Center for Spiritual Living. They were imprinted with the words “Complaint-Free World.”

The premise was simple. To break the habits of complaining, criticizing, or gossiping, you just had to switch the bracelet to the other wrist any time you did one of those three things. If you could keep it on the same wrist for 21 days, then you had broken the cycle and overcome the habit.

Barry and I used them for a lot longer than 21 days. We found ourselves wearing them off and on for years. And I’m still not perfect! But I’m a lot more aware of myself when I do complain, criticize, or gossip. “The purple bracelet,” as we called it, was a good tool for learning new communication patterns.

The problem is, the rest of the world hasn’t taken up purple bracelets. And I have a terrible time receiving criticism. Some people simply wither. Not me. I cry.

When I hear the first few words of criticism, my brain starts screaming “Flee! Flee! Flee! Die! Die! Die!” I begin apologizing non-stop for my flaws, my failures, my looks, my weight, my ancestry, and anything else I can think of. I back out of the room, trying not to bawl until I’m out of sight.

It’s hard for me to learn anything new that way.

To me, “constructive criticism” sounds like an oxymoron. How can it possibly be constructive when it’s hurting my feelings so much?

Lately, however, I’ve found that there is another way for me to learn from my mistakes. There is such a thing as constructive criticism. It requires two simple things: Kindness, and these two words: “Next time.”

The first time I really got “next time” was in August, with Barry’s Dad, Dave. He’d been working out in the yard and had stopped into the kitchen for a drink of water. I’d been filling water jugs for Burning Man and carrying them out to the van; I was about to start packing food from the kitchen.

“Uh, Margaret…” said Dave, politely, “Next time you use the hose, let me put it away.”

I stopped and stared at him, like a deer in the headlights. Was I being chastised? Had I been a bad person? Should I apologize profusely? Or should I just pay attention to the words in his request?

He went on to explain that I’d coiled up the hose without draining it. When I hung it up in the garage, the leftover water in the hose ended up all over the floor. He said it so matter-of-factly, the only thing I could say was “Oops.”

The next thing I knew, we were both chuckling at my mistake. That was a first.

The long hose was so heavy, I had really struggled with it. Dave was kindly acknowledging that under the circumstances, I had done the best I could. He had a better solution, and in the spirit of constructive suggestion, he was offering it to me, free of charge. Of course, I couldn’t change the past, but “next time” I could do better.

I came away from the interaction with a new appreciation for Dave’s communication skills. I’ve always known him to be a super-quiet guy, one of those engineer-types. Coming from my own loud, boisterous family, I assumed quiet people were poor communicators. Now I saw how wrong I was. He used his words so carefully, so sparingly, that I could take him at face value. He only said what he meant.

He still liked me and could still laugh with me, even though I’d flooded his garage.

A few weeks later, I was staying with a friend in San Jose. “Next time you use that sharp knife, please wash it and put it away in the knife block.” Again, there was no chastisement for what I had done, only a constructive suggestion for how to do it better in the future. Again, the sentence started with, “Next time.” Again, it was delivered with a kind smile.

I was learning how to transform criticism — of me! — into useful learning.

Unable to fix or remedy what we did in the past, people become defensive. “It’s not my fault! The cat was drinking out of it!” Then kindness goes out the window, and an argument begins.

With two simple words, “next time,” we can give each other a graceful way out. We can acknowledge that the other person did they best he or she could and still take advantage of the teaching moment. We can be kind and unambiguous with our words, instead of delivering stinging criticism.

I recommend you try it. Next time.