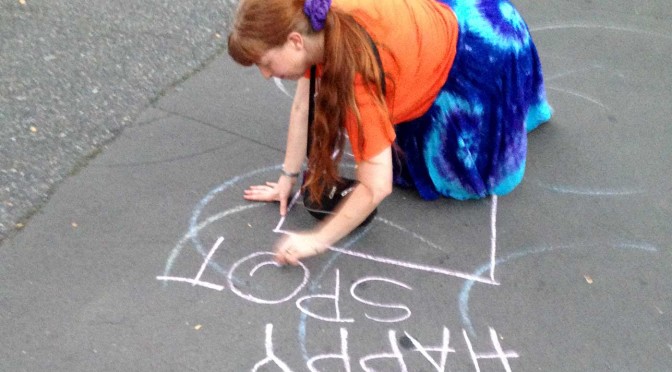 A month ago, Barry and I started house-sitting in Seattle. The day our friends left was completely chaotic — luggage scattered about the house, last-minute baking, noisy children, and a slightly hyperactive dog. Then they swept out the door, and it was painfully silent.

A chicken clucked in the backyard. The second hand on the kitchen clock went: Tock. Tock. Tock.

I peered into the fridge, where mysterious leftovers waited in unlabeled, and more alarmingly, undated, containers. “I think I’ll walk down to the grocery store,” I announced, as I set off down busy 65th Street.

I took a different route coming back, down a tree-lined side street: 63rd.

A couple of blocks before I reached home, I came upon an interesting scene. There was a table in the middle of the sidewalk, surrounded by lawn chairs. On the table were chips, crackers, and hummus. Nearby, in the grassy parking strip was another circle of chairs. There were wine glasses on the grass, some empty, some half-full.

There was no one there. As someone later commented, “It looked like the aftermath of Chernobyl.”

What I knew, that added to the strangeness of the scene, was that the chairs were on the corner where I’d found the Original Happy Spot. As I stood there, puzzled, I heard music and  followed it to some concrete steps leading up to a tall fence. There was laughter and the clink of glasses, but I couldn’t see who was on the other side of the gate. Would they be young? Old? Friendly? Suspicious?

I raised a trembling hand, and I knocked.

A woman leaned over the patio railing and hollered, “Who’s there?” Before I could answer, she said, “Come on in!” In the backyard, about twenty people and a Black Lab stared at me curiously. It may have been because I was a stranger. It also may have been my loud outfit, a combination of an orange t-shirt with a tie-dyed blue-and-purple skirt. I’ve heard dogs are color-blind, but this one knew something was weird.

“Um, hi,” I said, nervously. “I’ve never crashed a party before, but I wanted to tell you something about your corner. It’s featured in a YouTube video about the Happy Spot.”

“The what?” they exclaimed, in chorus.

I went on to explain that their corner was where I’d found the Happy Spot in 2009, how I’d taken it to Burning Man that year, and ever since, I’d been spreading the idea of Happy Spots wherever I went.

“Does anyone know who marked the original Happy Spot in your street?” I asked.

They interrupted each other in their eagerness to talk. No one knew of a happy spot, but they told me the corner was known as “Chalk City,” because so many of the neighborhood kids drew on the pavement there. “I’ll ask my daughter,” said one woman. “There’s a big block party there, you know,” said someone else.

“It was there two years in a row; surely somebody will remember,” I told them. “It’s kind of a big deal to me.”

“Would you like a glass of wine?” somebody asked. I shook my head, politely. “I was on my way home with these groceries. My husband will be wondering where I am.” That led to them insisting, “Go get him!” “OK, I will,” I said.

I walked back to the Chicken house with my groceries. After I put them away, I asked Barry, “Do you have some time to come with me right now? Maybe an hour or so? It’s a surprise.”

I couldn’t wait to crash the party again, with Barry this time.

He got up from his computer, and as he put on a fleece, I surreptitiously picked up a piece of chalk and put it in my pocket, as Philip Wilson had once done for me. Later, he told me, “I was expecting you to take me to the Happy Spot. I just didn’t know there would be anyone there.”

I walked him back to the corner, but he was puzzled as I kept going past the Happy Spot and marched up the concrete steps again. Instead of knocking, I flung open the gate and barged in. “I’m baaaack!” I announced, “and this is Barry.”

They immediately sat us down with a couple of glasses of wine, and we chatted and enjoyed the music. One of the guitarists was our neighbor from two blocks away. It was a beautiful summer evening, and a lively group. I couldn’t keep track of everyone’s names.

Eventually, as we were talking about the Happy Spot, someone said, “Let’s go out there and make one.”

I marched back down the steps, followed by Barry and a few of the party-goers. In the appropriate place, I knelt and drew the familiar box, labeled it “Happy Spot,” with a smiley-face in the O, and then wrote “Stand Here” with an arrow.

I stood up, and Barry and I demonstrated how it worked. Then everybody wanted to try it, and we all took turns standing in the box, hugging each other, and taking pictures. Eventually, the rest of the party came down to see where we’d gone, and we hugged them, too. The party continued, literally in the Original Happy Spot in the middle of the street, for quite some time.

It was only a few feet from the Spot to the abandoned table and chairs I’d first noticed. For the next hour or so, we sat there, periodically getting up and introducing other neighbors to the concept of the Happy Spot by giving them unexpected hugs.

You try it and tell me. All you need is a piece of chalk or pencil-and-paper; a big, friendly smile; and lots of hugs.

Look out, world! No party is safe from Meps, the Happy Spot Party-Crasher now!