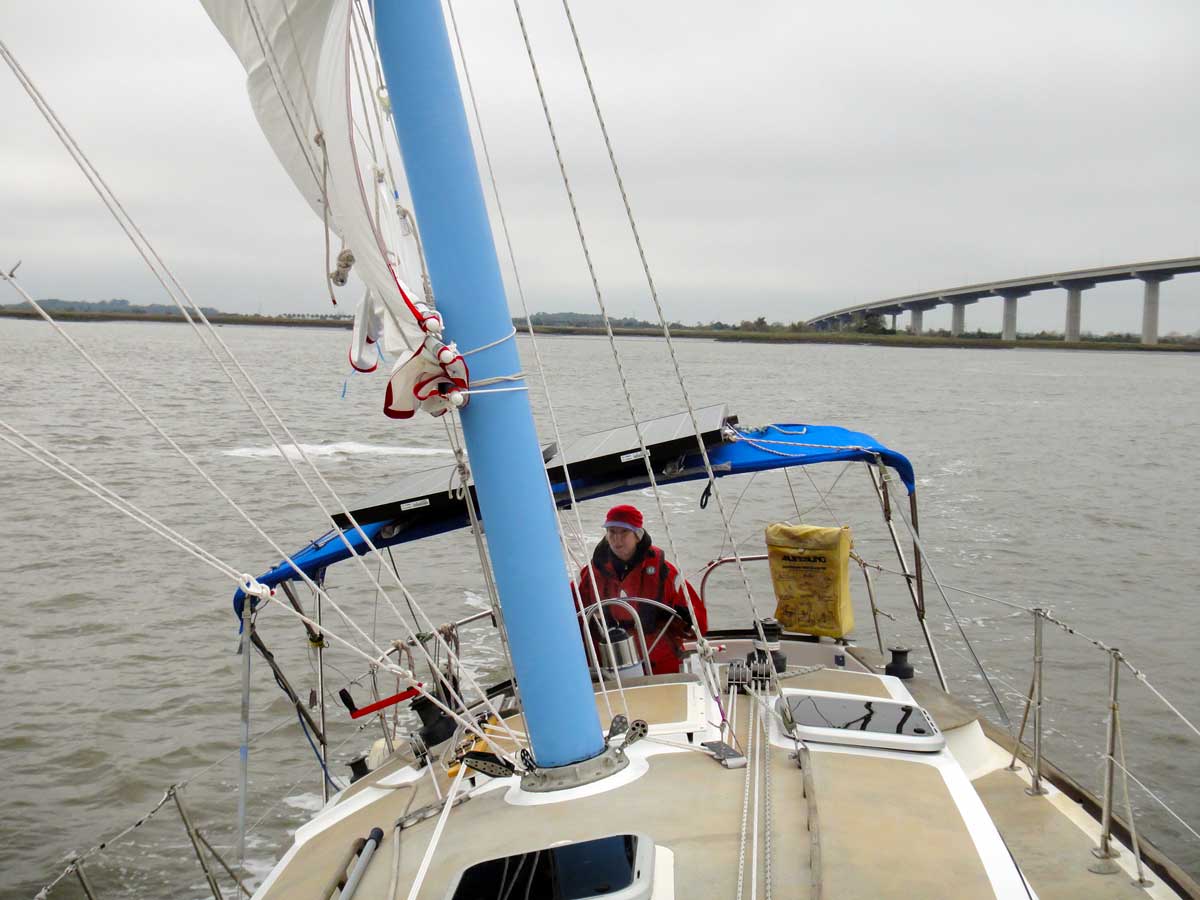 On Thursday, the 13th of December, the sky in Brunswick, Georgia was gray and cloudy, threatening rain. The temperature had plummeted, and boaters in the marina hunkered down in their cabins by their heaters. A steady stream of cruisers had left the Brunswick Landing Marina in the prior two weeks, heading south in search of sunshine.

I stopped in the office that morning to give Sherry a heads-up. “If you notice our slip is empty today, we’re not leaving without paying our bill. We’re going out for our first test sail.” She gave me a big encouraging smile and a thumbs-up.

We rooted through our lockers and dressed as if we were going for a winter sail in the Pacific Northwest, putting on layers of thermal underwear, wool socks, fleece jackets, gloves, and those ubiquitous waterproof red jackets and black bibs we call “foulies.”

A warning here for our landlubber friends: If that technical term left you shaking your head in dismay, beware of what’s coming. Even our sloop-rig friends may complain that I’m using too much junk-rig jargon. Since it’s hard to scroll back and forth to footnotes in a web document, I’ll explain the jargon as best I can at the bottom of each paragraph.

We departed the marina on 12-13-12 at 13:01. It took us about a half hour to motor up the East river to the Brunswick river, which is wide and deep. Looking up the river, we could see a couple of huge container ships docked and unloading a half mile away. To the left, under the soaring Sidney Lanier Bridge, the casino boat was docked, but they weren’t moving either. We had the river to ourselves, so we set about hoisting our sails for the very first time.

The wind was gusty, ranging from 10 to 15 knots, and we could see by the water rushing past the navigation buoys that a wicked current was ripping through. I had hoped for a mellow, easy first sail, but that was not to be.

I left the motor running as Barry began to hoist the 500-square-foot split-rigged mainsail (the mainsail is the one in front…split-rigged means our sail extends four feet in front of the mast, but the part around the mast is cut away). Keeping in mind that the main on Flutterby’s original rig was only 350 square feet, I gave him a conservative order to keep two panels reefed (A reef is a way to make the sail smaller when the wind is blowing harder).

Our mainsail has seven panels that work kind of like a window shade. The rig was designed to easily put up to five reefs* in, and with some extra work, can even rig it in a storm with just one-seventh of the sail. However, that afternoon, the word “easily” did not apply, and the process of simply raising sails took over 45 minutes.

I was focused on the helm, making sure that we weren’t swept sideways into the massive bridge footing, as Barry started hoisting the main using the 3-part halyard. With our multi-part halyards and sheets, we end up with a lot of extra line piled in the cockpit, but we hardly ever have to use a winch.

That first hoist, though, things went wrong. As the third sail panel started to go up, Barry realized that the yard-hauling parrel* was fouled** by the topping lift***, so the yard couldn’t go up all the way. The lazy jack sail gatherer**** for the jiblets***** didn’t work.
===
*The rope that positions the yard, which is the pole at the top of our sail.
**Fouled=messed up
***Ropes from the top of the mast that hold up the sail bundle so it doesn’t fall on our heads when we are reefed or not sailing. The sail bundle includes the sail fabric and the battens, which are poles that go between each of the panels.
****Contraption of rope and webbing that hangs from the topping lift to keep things tidy.
*****On a split rig, the bits of the sail that are in front of the mast.
==

N.B. I can see that writing this to Barry’s requested technical specifications is going to be a bit of a challenge!

Our rig was designed to be sailed from the cockpit, with all the various control lines running back there. But when things go awry, somebody has to clamber up on deck and straighten it out. Barry spent a lot of time that day clambering up on deck to straighten things out. Still, we did eventually get the mainsail hoisted, and then we turned our attention to the mizzen (the smaller sail that is at the rear of the boat).

We didn’t have any problems hoisting the mizzen, and finally, it was time to turn off the engine and trust that we could maneuver this 33-foot vessel under sail alone.

That special moment, one that all sailors know and appreciate, was followed by high-fives, cheering, and victory-dances (but not on top of the cockpit grate!) by the crew of the s/v Flutterby. For the next 60 minutes, the sound of water rushing past our hull was accented with peals of joyful laughter from yours truly. After five years of waiting for this moment, I was giddy and giggling.

The two of us took turns taking pictures and fighting for the right to steer. It was like we had a beautiful horse, and we both wanted to ride. We were both very curious to know how high she could point, or go upwind, but three knots of current kept sweeping us down the river, so our GPS track didn’t show a lot of progress. Still, we fairly flew when we went downwind, especially when we put the two sails out on opposite sides of the boat. Some junk-rig sailors call that “wing and wong” instead of “wing and wing.”

We didn’t go very fast that day, occasionally seeing boat speeds of five or six knots. We were a little unsure of ourselves, the weather, and the new rig, so we kept it slow with our double-reefs, but the potential was there to go much faster.

The whole time we were sailing, we were near the awe-inspiring bridge. The bridge towers are 485 feet, the clearance is 185 feet, and it’s the longest bridge in Georgia. Hundreds of cars passed by, along with the hardiest joggers and walkers. Did they see us? Did they notice our beautiful red-and-white butterfly sails?

Finally, we decided to call it a day and head back to the marina. Barry started the noisy engine, and I lowered the sails, a process that entails releasing the halyard* while pulling in the sheet**, the adjustable downhauls***, and the yard-hauling parrel. One thing I love is the windvane effect of the junk rig — we don’t have to turn the bow**** of the boat into the wind to raise and lower our sails. Like a weathervane, we can just let them swing freely in the wind as we raise and lower them.
===
*The line that pulls the sail up.
**The line that controls the position of the sail relative to the wind.
***Little fussy bits of rope.
****The pointy end.
===

And then we returned to our slip, triumphant. Flutterby was now a proper junk-rigged sailboat, and we were ready to head south with the other cruisers for the winter.

Pictures of the big event: